Whatever Happened to the "Secondary Palette"?

Everybody remembers that when the club's branding was first unveiled back in 2014, the colors were announced as "Sky Blue", "Obsidian Blue", and "Flag Orange". Primary, secondary, and tertiary. But does anybody remember that there was originally supposed to be three more colors?

In addition to those three colors of the Primary Palette, supporting documents revealed a Secondary Palette of "NY Gold" (a metallic Old Gold), "NY Orange" (an Athletic Gold just a little darker than that used by the Green Bay Packers), and a royal blue they called "NY Blue". 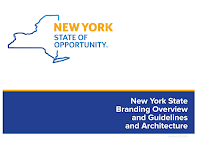 I'm not sure it's a great idea to label that Athletic Gold as "orange", but it's always tricky when you also have a metallic gold in the color scheme. "Gold" is the official name for that color in heraldry, vexillology and sports design, but the general public keeps thinking the color needs some metallic sheen to qualify.

There's more logic to the choice of the latter two colors, which are remarkably similar to the official colors of New York State. The City has blue and orange, the state blue and gold.

This page from the New York State Branding Overview and Guidelines and Architecture show the blue and gold in context: 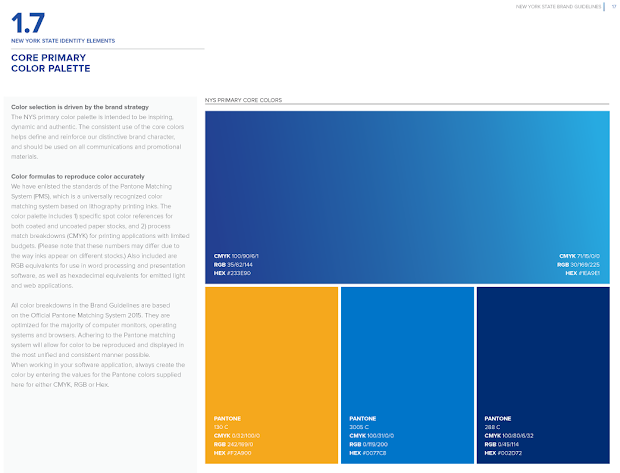 But regardless of what you want to call those three secondary colors, or why they were chosen, I'm more interested in why the club changed its mind. So far as I know, they were never used.

The gold almost found its way into the club's branding; it was used as an outline in one of the two badges put up for a fan vote: 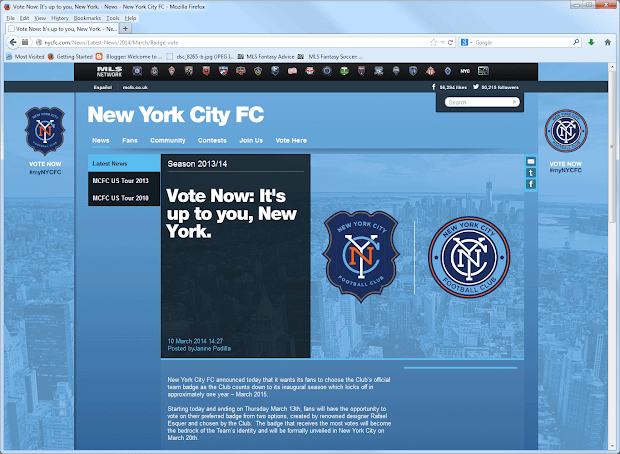 On the club's promotional materials, they listed it as the "color of success, elegance and triumph". 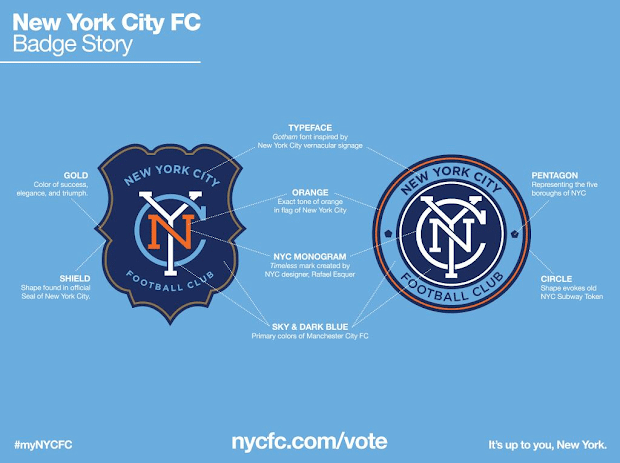 My understanding at the time was that the Secondary Palette was never intended to be used on kits or merchandise, featured instead in web design and similar graphic applications. But unless I missed something, that was never the case.

We may never know why the club changed course. It's another interesting chapter in our growing story, a reminder of the false starts and course changes made when you build a club from scratch.
Posted by Chance Michaels at 3:01 PM No comments:

Email ThisBlogThis!Share to TwitterShare to FacebookShare to Pinterest
Labels: design

We now have more clarity on the events at NYCFC House. 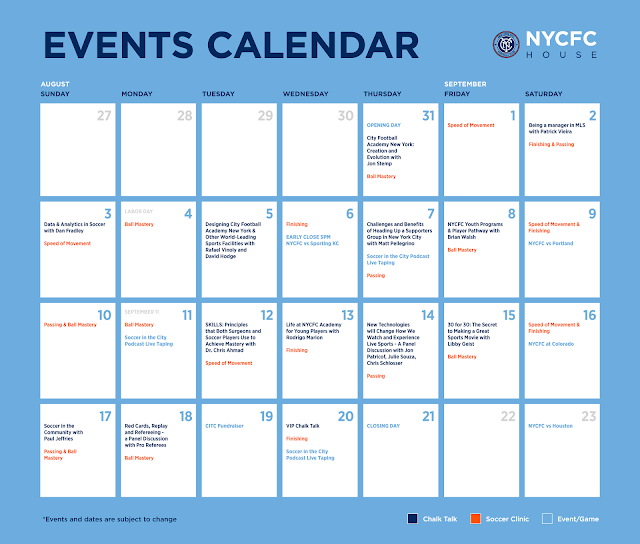 RSVP here.
Posted by Chance Michaels at 11:14 PM No comments:

Seriously, that's the best they can do? 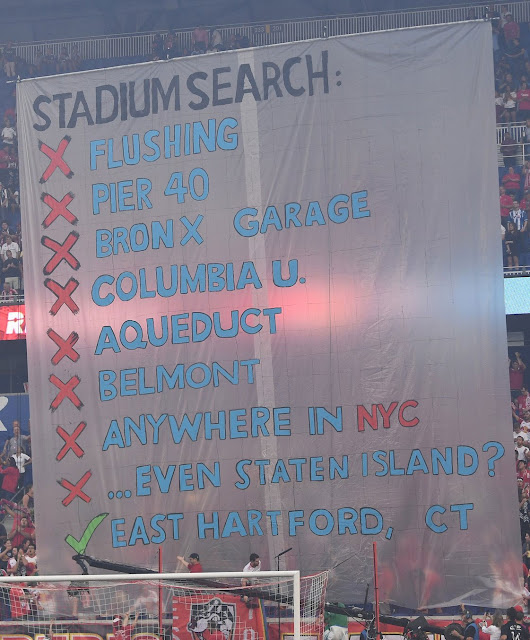 We hand them a golden opportunity, and this is the best they can make of it.

It's not terribly clever, has no real sense of humor, and it's not even particularly well-done. No wonder their fans thought the club was paying for our tifo, if straight lines are beyond their capabilities.

Kate Reilly had the best response:

Weak, indeed. Their tifo game has always been so.
Posted by Chance Michaels at 6:17 PM No comments:

Email ThisBlogThis!Share to TwitterShare to FacebookShare to Pinterest
Labels: tifo

Our Blues traveled to New Jersey, where they took a point at Red Bull Arena. Almost had the win, but they outplayed us and we ought to be happy with the point.

Posted by Chance Michaels at 11:48 PM No comments:

NYCFC House is "the Club’s first-ever pop-up shop and soccer experience space". For three weeks, club members can journey to Manhattan's Meatpacking District to buy stuff and participate in events. 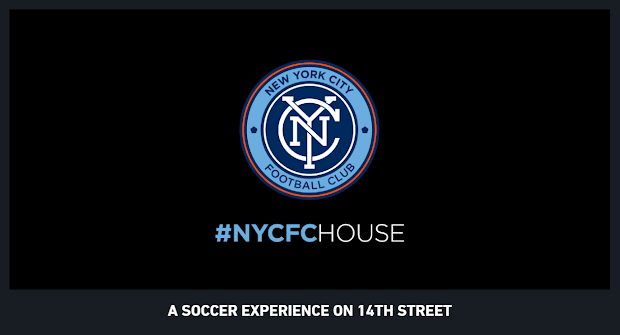 Here's what the club says we have in store at the House:

Support your city. NYCFC House brings you a selection of retail merchandise and exclusive, limited-time offerings so you can represent your team.

Try out some of the latest technology, then visit the Secret Pitch, where your little ones can test their prowess, finesse and discipline in the Beautiful Game. The player with the best score each day will win a prize!

More than a retail space, visitors to #NYCFCHouse will have a chance to hear from those who’ve shaped the world’s biggest sport during a series of daytime seminar series, “Chalk Talks”, as well as meet players, legends and celebrity fans.

Immerse yourself in the virtual venue and hear about all our different offerings straight from NYCFC front office staff. 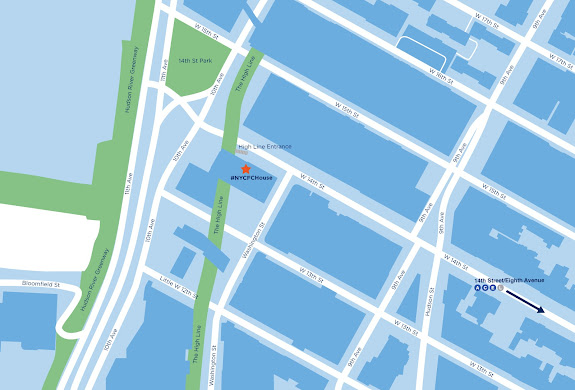 #NYCFCHouse will be located in the Meatpacking District (446 West 14th St.) from August 31 to September 21. General opening hours are 10 AM to 6 PM.

Looks interesting. I know I'll be checking it out.
Posted by Chance Michaels at 3:32 PM No comments:

So NYCFC is losing a home game, booted out by the Yankees rescheduling a rain date. And rather than rent the fields at Columbia or Fordham or some other place in the city, they have in their infinite wisdom decided to schedule it at the University of Connecticut in East Hartford.

The Third Rail ran some buses up to that stadium to watch a USMNT match back in 2014, and the traffic was so bad that we ended up pulling over and watching from bars along the way. It's an easy three hours each way, even on a Saturday afternoon. 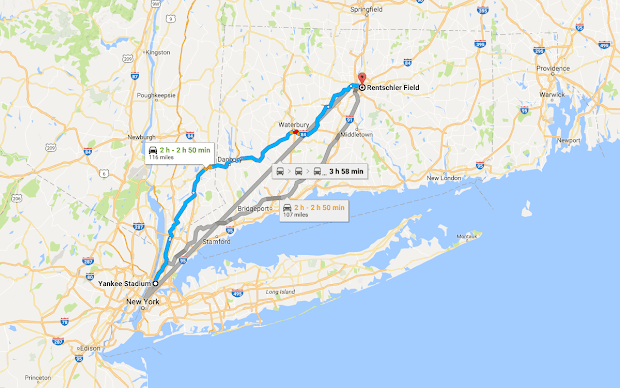 What a debacle. And what's worse is that the club has obviously been working on this for weeks and decided to spring it on us now. If they had come out and announced that the match would have to be moved, and later that it would be held three hours away from Yankee Stadium, at least we would have been prepared for it.

This smacks of Lampard all over again. Why won't the club work with us? We're more than customers, we're partners. Or at least we ought to be.

So that's one home match I won't be able to attend this season. Which sucks. Not a good look, fellas. Can't wait to see the Red Bull tifo now.
Posted by Chance Michaels at 11:01 AM No comments:

An amazing match in Yankee Stadium, as NYCFC comes back in the fourth minute of stoppage time to claim the win.

A very unusual gaffe from Sean Johnson there. Shows the mettle of this club that they don't let his blunder cost them the game. New York City never says die.
Posted by Chance Michaels at 9:35 PM No comments:


Wonder what this'll be? A merchandise outlet, space for meet & greets, or some type of community outreach? We'll see.
Posted by Chance Michaels at 3:29 PM No comments: