The "NYC Soccer Initiative" is Announced 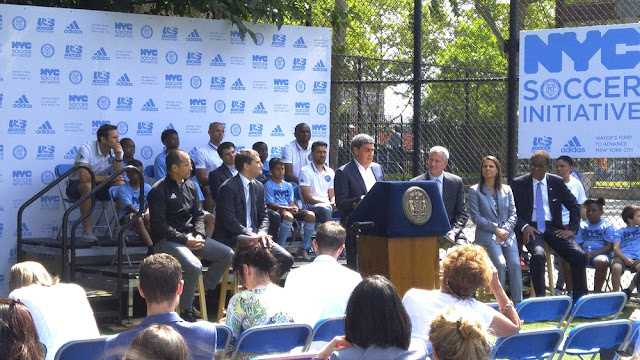 Huge news for NYCFC today, as the club announces a partnership with Mayor de Blasio, Adidas, and the US Soccer Foundation to grow the game in our community. They will build and maintain fifty soccer fields in underserved neighborhoods of all five boroughs. 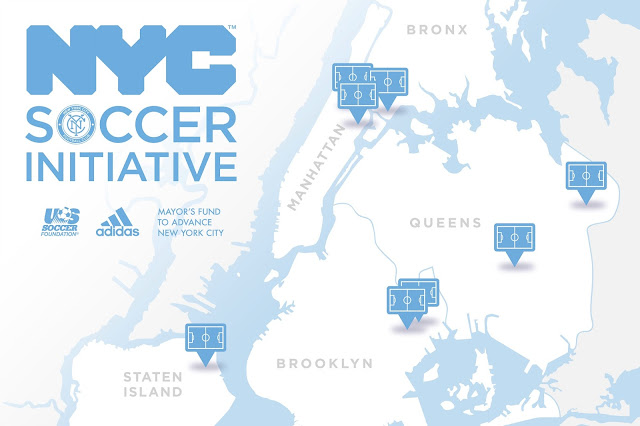 The full press release is here:

NEW YORK––Mayor Bill de Blasio and the Mayor’s Fund to Advance NYC, the U.S. Soccer Foundation, the New York City Football Club and adidas today announced the launch of the New York City Soccer Initiative, a public-private partnership that will build and maintain 50 soccer fields in underserved neighborhoods across the five boroughs over the next five years. Fields will begin to open for play as early as next year.

“These new soccer fields will be essential in keeping our young New Yorkers safe, active and connected with the community. With this partnership, we are tackling inequalities in all its forms – including in our parks and outdoor spaces,” said Mayor Bill de Blasio. “In the city of immigrants, with so many different languages and cultures, the New York City Soccer Initiative will be one of the great tools we use to unify young New Yorkers. My thanks to the Mayor’s Fund, the U.S. Soccer Foundation, New York City Football Club and adidas for coming together and building a meaningful program.”

“When we can make space for children to play in, we’re saying that we’re invested in their long term health and wellbeing,” said Council Speaker Melissa Mark-Viverito. “The City Soccer Initiative will open the doors to a whole new world for kids who may otherwise not have access to these programs. Healthy kids grow up to be productive adults, and I thank the administration, the New York City Football Club, adidas and the U.S. Soccer Foundation for giving South Bronx and East Harlem children the opportunity to experience the exciting world of soccer.”

"The U.S. Soccer Foundation is honored to work with the New York City Football Club, adidas and the City of New York to make a major impact in the City’s five boroughs. The U.S. Soccer Foundation is committed to growing the sport of soccer and using the game as a vehicle to improve health and social outcomes among children in underserved communities. The commitment of strong partners like these underscores the importance of this work and represents a big step toward transforming the landscape in this great city and across the nation,” said Ed Foster-Simeon, President and CEO of the U.S. Soccer Foundation.

“We believe that through sports, we have the power to change people’s lives,” said Ernesto Bruce, Senior Director of Soccer for adidas. “Sports gives young people so many amazing social, emotional and physical benefits that reward them for life. But there’s a lot threatening sports today – including safe access for kids to play. Today’s announcement to create and maintain 50 soccer fields, spread across the five boroughs of New York City will help bring sports to more kids, giving them a sense of team and community they might not otherwise have. We‘ve enjoyed partnering with Mayor Bill de Blasio; the Mayor’s Fund to Advance NYC; the U.S. Soccer Foundation; and the New York City Football Club in the development of this project thus far and are eager to have the fields become a vital, thriving part of the larger communities that they serve.”

“By pooling public and private resources and expertise to implement creative solutions that address our toughest challenges, the New York City Soccer Initiative is improving the lives of New Yorkers,” said Gabrielle Fialkoff, Senior Advisor to the Mayor and Director of the Mayor’s Office of Strategic Partnerships. “With increased opportunities for physical activity and healthy eating in our most underserved communities, paired with enriching programming for young people, we are putting these kids on a path to success.”

The program will provide after-school soccer and mentoring programs, such as soccer clinics, festivals and youth summits to promote safe, active and connected communities. The New York City Soccer Initiative will also include a partnership with the City’s Young Men’s Initiative, providing young men of color with mentorship opportunities.

Through the construction of these new fields, the New York City Soccer Initiative will aim to connect more young people to soccer, expand U.S. Soccer Foundation’s nationally-recognized soccer after-school program – Soccer for Success ­– and repurpose underutilized spaces in our most underserved neighborhoods, creating a safe, public area where a community can gather. All of the neighborhoods being selected to host the New York City Soccer Initiative fields are focuses of the Mayor’s Building Healthy Communities Initiative, the Parks Department’s Community Parks Initiative or the Young Men’s Initiative.

Evidence shows that connecting young people – especially those in the lowest-income communities – to mentorship opportunities early on is directly correlated to future success in high school, college and their careers. The New York City Soccer Initiative supports Mayor de Blasio’s OneNYC goal of ensuring that New Yorkers of all ages can live, work, learn and play in neighborhoods that promote an active and healthy lifestyle.

The New York City Soccer Initiative will utilize the U.S. Soccer Foundation’s Soccer for Success program – a recipient of the White House’s 2011 Social Innovation Fund Award – and builds off the success of the New York City Football Club’s Healthy Hat-Trick program. Together, those initiatives have served more than 15,000 young people with after-school programming in New York City. These programs are proven to have had a positive impact on their young participants throughout the five boroughs:

73 percent said the programs helped them to make healthier food choices;
83 percent said it helped to improve their confidence;
70 percent have said they now enjoy going to school more.

“Children reap critical benefits from exercise and it’s critical to form healthy fitness habits at a young age to support their physical and mental health," said Schools Chancellor Carmen Fariña. "The New York City Soccer Initiative will provide safe outdoor space for children to engage in physical activity, have fun playing soccer and also learn about the importance of making healthy choices and being active. As a big soccer fan myself, I know the significant impact this will have on students and families – including in many of our immigrant communities – across the City.”

“NYCHA is a proud partner in this initiative bringing soccer fields to neighborhoods that need them – and we’re thrilled that two of our developments will directly benefit,” said NYCHA Chair and CEO Shola Olatoye. “These fields and this program will bring people together and provide additional opportunities for exercise and healthy competition – helping us create more connected NYCHA communities and improving quality of life for residents across the five boroughs.”

Congressman Charles Rangel said, “I applaud Mayor de Blasio for fostering this public-private partnership through the New York City Soccer Initiative that will serve youths in our congressional district after the last bell – at Harlem Lane Playground and at P.S. 83 Luis Munoz Rivera School. The Soccer for Success program will provide consistent mentorship, exercise and recreation to our children who will learn not only to play a sport, but also be part of a team.”

“I applaud the Mayor, adidas, the U.S. Soccer Foundation and the New York City Football Club for spearheading this initiative ; anything that creates the opportunity for individuals to exercise, play sports and enjoy the outdoors in their local neighborhood benefits the entire community.” said State Senator Leroy Comrie. “I look forward to the creation of these new soccer fields and hope that the Mayor’s Office continues to support youth programming so that these spaces are fully utilized going forward.”

“I'd like to thank the Mayor, the New York City Football Club, the U.S. Soccer Foundation, and adidas for bringing a soccer field to our community,” said Assembly Member Rodriguez. “This new amenity will be a catalyst to promote healthy habits, teach leadership skills and inspire our youth. Thanks to their generosity, East Harlem kids will no longer be left on the sidelines.”

Assembly Member Francisco Moya said, "Growing up in Queens, some of my earliest memories are of learning to play football in Flushing Meadows Corona Park. The announcement today of the New York City Soccer Initiative to build new football facilities in underserved communities will give more children in our great city a chance to play the beautiful game. With the growth of football's popularity, as well as the South American population, these pitches will provide greatly needed relief to our current facilities that overwhelmed with use. I applaud the Mayor, the New York City Football Club, adidas, and the U.S. Soccer Foundation for partnering up to provide the kids in communities like mine the chance to make memories that will last a lifetime."

“Thanks to the New York City Soccer Initiative; thousands of children, teens and soccer fans from across the city will now have access to state-of-the-art soccer fields, as well as expert led mentoring and training programs” said Assembly Member David Weprin. “I am especially pleased that one of these soccer fields will be located in the 24th Assembly District at the Irwin Altman Middle School, and I applaud Mayor Bill de Blasio for scoring a goal for active and healthy lifestyles.”

Assembly Member Matthew Titone said, “All children should have a good education, healthy food and the opportunity to exercise. Bringing the world’s most popular sport to underserved neighborhoods will help our youth become more fit and provide an outlet for positive activity.”

Council Member Barry Grodenchik said, "I am delighted to see the City investing in youth programs. As a former little league coach, I understand firsthand how beneficial sports can be. This initiative will serve thousands of young New Yorkers and provide important mentorship and after school programs throughout the five boroughs.”

Council Member Deborah Rose said, "This public-private New York City Soccer initiative is a welcome investment in my district, an investment that will not only enrich the lives of countless young people, but also the long-term health of our city as a whole"

This is outstanding news not only in its own right, but for what it could represent for the future. The Mayor's office obviously recognizes the role that NYCFC and the sport can play in the community, which can't hurt us when it's time to start talking stadium again.
Posted by Chance Michaels at 1:17 PM