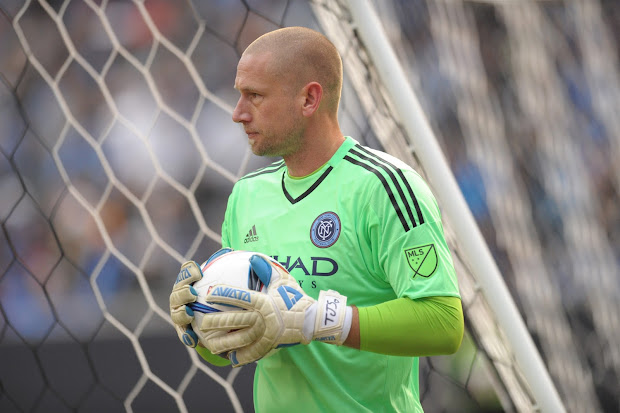 Just minutes ago, NYCFC announced that they had come to terms with goalkeeper Josh Saunders on a contract extension:

New York City FC is pleased to announce that goalkeeper Josh Saunders has signed a new multi-year contract extension. Saunders started 33 games for the Club this season and recorded four clean sheets in New York City’s inaugural campaign. Per Club and League policy, terms of the deal were not disclosed.

Speaking to NYCFC.com, one thing Saunders said he treasures most is the relationship and connection that he has with New York City FC’s fans.

“I love playing for this club”, said Saunders. “It’s a great honor for me and I’m definitely looking forward to playing in front of our fans again next season. I think the bond with the supporters is great. It’s not just an emotional connection. It helps the players and the fans alike because when you come into our stadium it’s intimidating. Having them truly cheer for people that they care for is great. The team is excited to get back to training soon and begin the hard work and preparation for next season.”

Saunders, who led Major League Soccer with 124 saves and was named New York City FC Defensive Player of the Year, credits goalkeeping coach Rob Vartughian for helping him to a successful first season in New York.

“Rob helped me tremendously. He put in a lot of work with me early on in the year and his work showed in my performances. I can’t thank him enough for everything he’s done and I look forward to working with him again.”

Sporting Director Claudio Reyna also expressed delight at re-signing the goalkeeper, “Retaining Josh was always part of our offseason plans. He is a tremendous leader and displays all of the personal and professional qualities we look for in a New York City FC player. He had a great season last year and clearly has a special relationship with our supporters.”

Echoing those comments, incoming Head Coach, Patrick Vieira, is thrilled about the extension.

“I’m delighted that Josh has signed a new deal with the Club and am really looking forward to working with him next season,” said Vieria. “He is a fantastic professional and is very experienced in this league; he will be an important leader for us both on the pitch and in the locker room.”

Looking forward to next season, Saunders said, “I’d like to have even better performances. Everyone said I had a good season, but I’m critical of myself. I feel like I let in too many goals. I take that personally, so I look at every angle to get better. I also think having MLS veterans is hugely important because we know the demands and rigors of the league. We can sit down and relay that information to the younger players on the roster, it only helps in the long run.”

Josh Saunders was nominated for Major League Soccer’s “Save of the Week” 11 times during the 2015 season and won New York City FC’s Etihad Airways Player of the Month on three separate occasions (March, April and October).

"Per Club and League policy, terms of the deal were not disclosed." How I hate that phrase.

I'm glad to see this, though. He kept us in many games, especially some of those early ones. And without a whole lot of help in the back.

Here are some of his highlights from 2015:

Posted by Chance Michaels at 2:17 PM