MLS is expanding its merchandise offerings, adding the clothing company HOMAGE (and yes, they insist on the all-caps).

Rep @NYCFC as the new boys on the block bring the beautiful game to the boroughs. http://t.co/3cJn6Emw3h pic.twitter.com/zrDvadNHBY

HOMAGE is based in Columbus, so they've been making inlucensed black-and-gold Crew shirts for the past several years.

They've also worked with the supporters' group for the past few years, but only recently secured a license to produce MLS shirts.

The quality of their stuff is great - I own a great orange-and-blue "NYC" shirt they put out a couple years ago, have been hoping they'd recolor it in our double-blues.

For now, their offerings appear to be limited to a blue tshirt with the slogan "FIVE BOROUGHS ONE CITY" and a Ruffneck scarf. 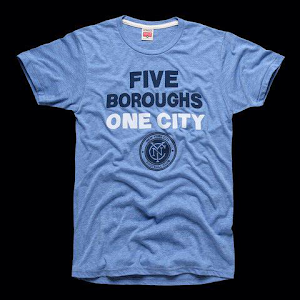 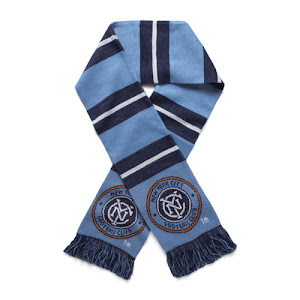 We'll see what else they come up with.
Posted by Chance Michaels at 2:17 PM