MLS is amazingly opaque when it comes to team finances, but Bobby McMahon over at Forbes has a great look at the numbers for this season.

When is a salary cap not a salary cap? Based on the salary survey published by the Players Union the answer has to be when it is operated by Major League Soccer. The regulation salary cap for each of the 20 teams is $3.49M but……then comes a myriad of loopholes and exemptions.

So many deviations in fact that rather than a cumulative cap of $70M the guaranteed compensation for the over 560 MLS players in 2015 slightly less than $160M.

No wonder a core competency for a MLS GM is understanding the cap and how to manipulate it rather than any ability to gauge playing talent.

The accompanying graphic is interesting:

McMahon also breaks the numbers down by position league-wide, and takes a close look at the Galaxy's numbers. He also has this nugget looking at the highest-paid players on each team relative to the rest of the payroll: 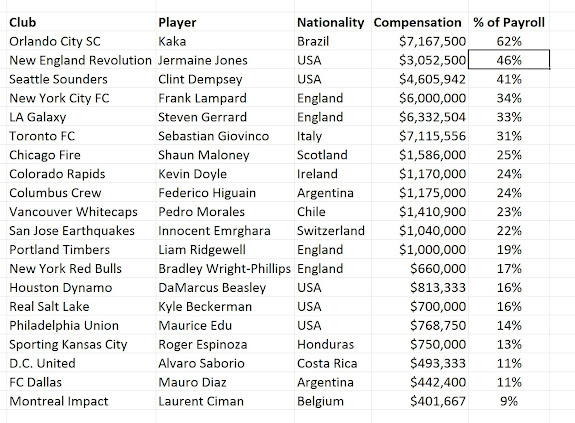 Check out the full article - it's well worth it.
Posted by Chance Michaels at 11:16 AM

Email ThisBlogThis!Share to TwitterShare to FacebookShare to Pinterest
Labels: salaries