The Next Chapter of The Third Rail Begins Today 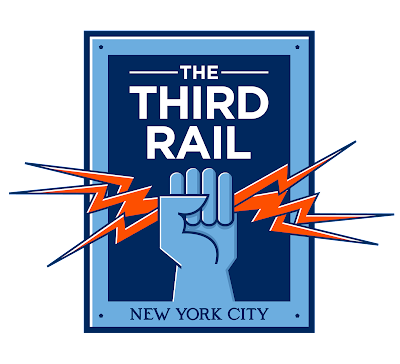 Two years ago, a group of soccer fans came together upon hearing that New York City would finally have a Major League Soccer team to call its own. From those early days came the group now known as the Third Rail, and in those two short years we have become a force to reckon with. Win, lose or draw, we stand and sing and bring the electricity to Yankee Stadium. We fill the bleachers and represent our city at every single away match. The growth of this group has been nothing short of astonishing, and I am proud to have been a small part of it.

Today, we are unveiling the next stage of the Third Rail’s development: a system of chapters that will make the experience even better for our members. We are moving decision-making and accountability to the local level, as smaller groups of members can band together based on a shared area or neighborhood and elect their own representation. These new chapters will adapt to their local membership, be more responsive to the individual member, and we are convinced that this will result in a supporter’s experience second to none in MLS.

This new direction calls for someone new to help guide it. Therefore, I have decided to step aside and let this new generation of Third Rail leaders stand up. I am resigning my position as President effective immediately, and will stay on in an advisory role to aid in the transition to our new chapter structure. I will be proud to remain a Third Rail member and father to three Light Railers.

Thank you to everyone who has made the Third Rail what it is today, a powerful force for soccer in New York City and one of the greatest supporters groups anywhere. I am looking forward to seeing what we can all do next.


- Chance
Posted by Chance Michaels at 11:22 AM No comments:

Email ThisBlogThis!Share to TwitterShare to FacebookShare to Pinterest
Labels: The Third Rail

"Now Playing, One Night Only"

After the Red Bulls supporters' weak tifo last month, I've been excited about showing what we've got.

Now playing in New York City - One Night Only - THE JERSEY BOYS!

Bravo to everyone who contributed their time and efforts. I'm very proud of you all.
Posted by Chance Michaels at 6:49 AM No comments:

Email ThisBlogThis!Share to TwitterShare to FacebookShare to Pinterest
Labels: The Third Rail, tifo

Now that New York is officially Blue, here's the lighting of the Empire State Building to prove it:

Posted by Chance Michaels at 11:54 AM No comments:

Not even a cloudy, rainy evening could dampen my enthusiasm for seeing the Empire State Building show the world where New York City stands. 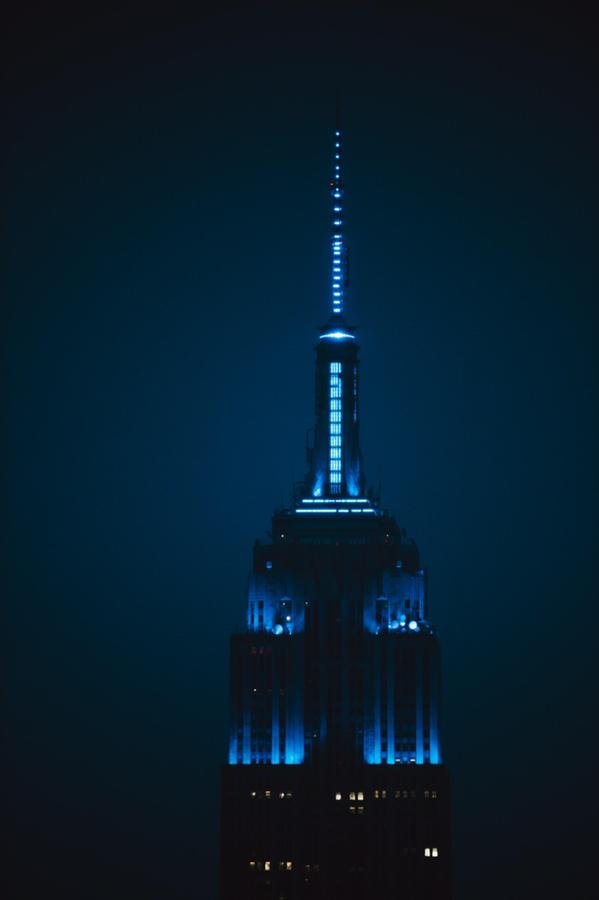 What a beautiful sight.
Posted by Chance Michaels at 11:36 PM No comments:

MLS is running a very interesting competition ahead of this Sunday's Hudson River Derby: 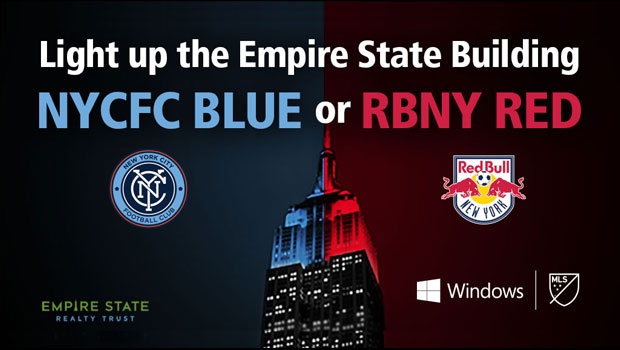 Is New York blue or red? Help light up the Empire State Building

Microsoft Windows wants to know - where do you stand? Are you NYCFC Blue or NY Red Bulls Red?

Windows will light up the Empire State Building on Saturday night at 8:30 PM ET with the color of the club that receives the most votes online and in social media.

Where do you stand?

You will be able to vote on that page and by using the hastag #WinNYCFC on social media. Tweets count, as do retweets.

We already know that NYCFC has an amazing group of fans. Now it's time to prove it; let's light the Empire State Building blue!
Posted by Chance Michaels at 1:28 PM No comments:

A Pitch Grows in Brooklyn

City continues its commitment to our community, with the announcement that they will be building a new synthetic soccer pitch at PS 24, just down the slope from me in Sunset Park. 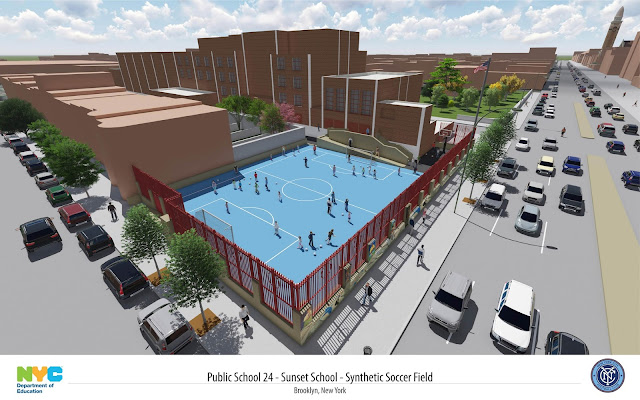 This is the full press release:

NEW YORK | The United Arab Emirates Embassy announced plans to construct a new, state-of-the-art soccer field at PS24 in Brooklyn’s Sunset Park neighborhood in collaboration with New York City FC. The new field will be completed and dedicated in September, as the 2015-16 school year begins.

The soccer field is part of the UAE’s ongoing commitment to help restore communities in New York and New Jersey that were impacted by Hurricane Sandy. During the immediate aftermath of the storm, the UAE pledged $10 million for recovery efforts ($5 million in each state), to provide assistance to public schools and reconstruction work, and to fund the construction of all-weather playing fields.

New York City Football Club and their foundation, City in the Community, will provide ongoing, complimentary after-school soccer programming and coaching for children at the school once the field is complete.

The UAE Embassy and City Football Group, the majority owner of New York City FC, have collaborated before to provide deserving children access to quality playing fields along with world-class coaching and education programs. In 2012, the Embassy and CFG’s Manchester City FC unveiled a rooftop soccer field at PS72 Lexington Academy in East Harlem, the first of its kind in New York City. Today, the program at PS72 is organized and managed by City in the Community and serves more than 400 kids a week through after-school programs, promoting healthy eating and physical exercise.

“Our students at PS24 were thrilled to find out about the new soccer field. For the first time, my students are anxious for summer vacation to end so they can start playing soccer,” PS24 Principal Rose Dubitsky said. “We are honored to be chosen by the UAE and NYCFC to receive a gift that will benefit students for years to come.”

New York City FC players Khiry Shelton, Sebastian Velasquez, Kwadwo Poku and Patrick Mullins participated in the event and delivered the news to the children and other community members. They were joined at PS24 by UAE Deputy Permanent Representative to the United Nations Jamal Al Musharakh.

“Today is such a special day for this great group of kids," Shelton said. "On behalf of my teammates at NYCFC, we can’t wait to come back in the fall to dedicate the new field and play soccer."

“In the short time since we have been in New York, we have seen our fans’ passion for the game," New York City FC President Tom Glick said. "We are excited to partner with the UAE Embassy to continue the tradition of sharing the love of soccer with young fans across New York."

During the surprise visit at the school, the kids received autographs and pictures with the New York City FC players, and were shown a rendering of their new soccer field. The players also led a soccer clinic for the kids.

“The UAE Embassy’s community soccer program started in Manhattan, and we are excited to expand it to Brooklyn," said Yousef Al Otaiba, UAE Ambassador to the United States. "Together with local partners across the U.S., we are delighted to help provide kids with safe places to play soccer.”

The PS24 soccer facility will be the ninth field built in the United States with support from the UAE Embassy. In partnership with local community organizations around the country, the UAE Embassy has also funded fields in Harlem, Washington, D.C., Dallas, Los Angeles, Chicago, Miami, Atlantic City, N.J. and Asbury Park, N.J.

About the United Arab Emirates:

The UAE is a source of stability, tolerance, innovation, and growth in the Arabian Gulf and around the world. The United States and the UAE are close friends and strong allies, working together to promote regional security, create economic prosperity, and address pressing global challenges. In fact, the UAE is the largest export market for US goods in the Middle East and more US naval vessels visit UAE ports than any other port outside the United States. Cultural, educational, and medical partnerships between the UAE and US are spurring innovation, inspiring creativity, and increasing understanding in both countries.

Really love to see this.
Posted by Chance Michaels at 7:36 PM No comments:

Is the Adidas Catalog Teasing a Navy Blue Away Kit? 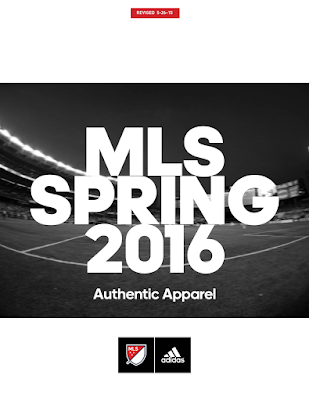 The MLS 2016 Authentic Apparel catalog was leaked online this past week, and is available for your perusal.

It's sixty pages of merchandising goodness, and it contains a tantalizing hint of what might be coming for our New York City Football Club.

The catalog starts, naturally enough, with jerseys. Four solid pages of jerseys, in fact, for every club in the league.

All jerseys carrying over from this year are presented in full. It also looks as though the Columbus Crew's alternate black jersey will become the primary next year, which is an unfortunate downgrade (own the yellow!).

Jerseys yet to be unveiled are represented by teaser images, closeup details presumably from the jerseys themselves. 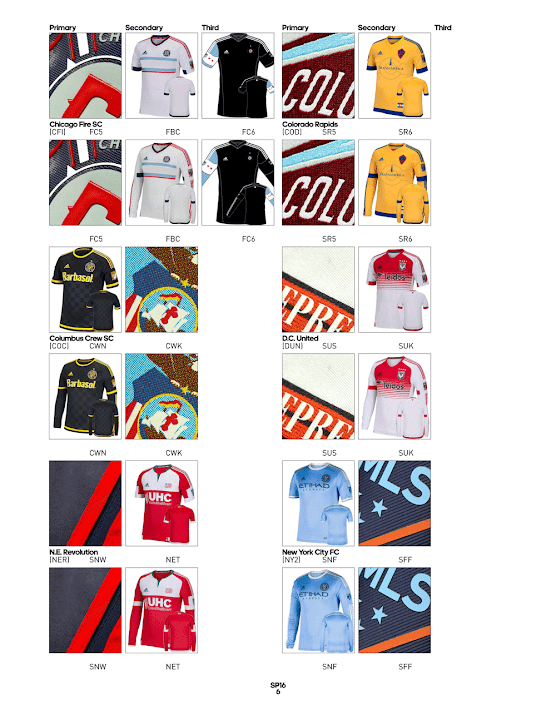 Let's take a closer look at that NYCFC teaser. 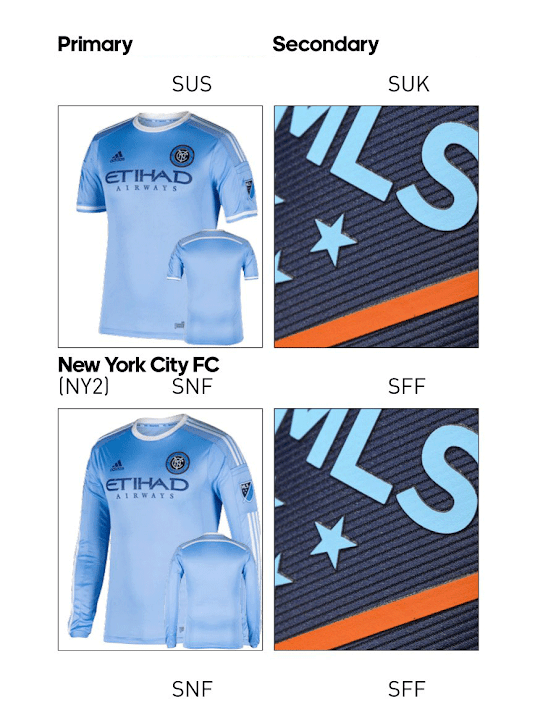 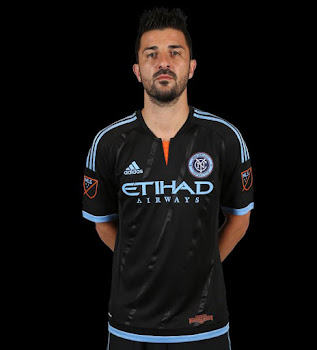 That looks a lot like a navy shirt and patch.

It's the same design as the current black jerseys, with sky blue letters and stars surrounded by an orange shield outline. But the background color appears to have been swapped for dark blue.

So at the least we can infer that the black jerseys will be retired. Is this telling us that we will get a navy jersey in its place?

I originally thought that perhaps I was over-thinking this, that the teaser was a bad Photoshop job or just a generic placeholder unrelated to the jerseys yet to be unveiled. But then I happened upon the page for Replica Shorts, and although they're replicas they are billed as being "Just like the On-Field Authentic Short worn by players": 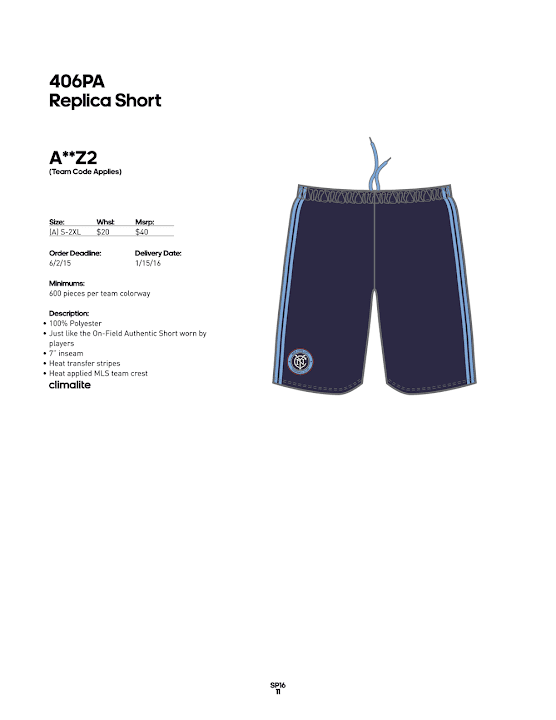 That would make the black jerseys a one-off. If so, I wonder if there will be any fan backlash, considering how popular they are with the supporters.

There's more to see in the catalog. Here's a quick look at the training gear: 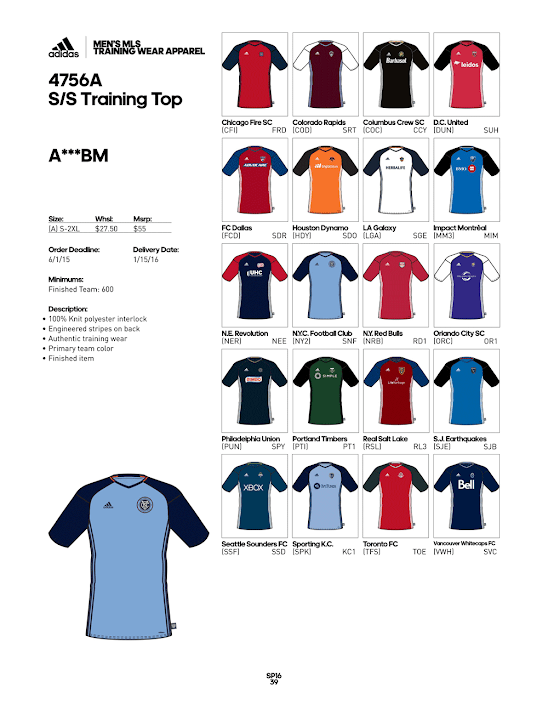 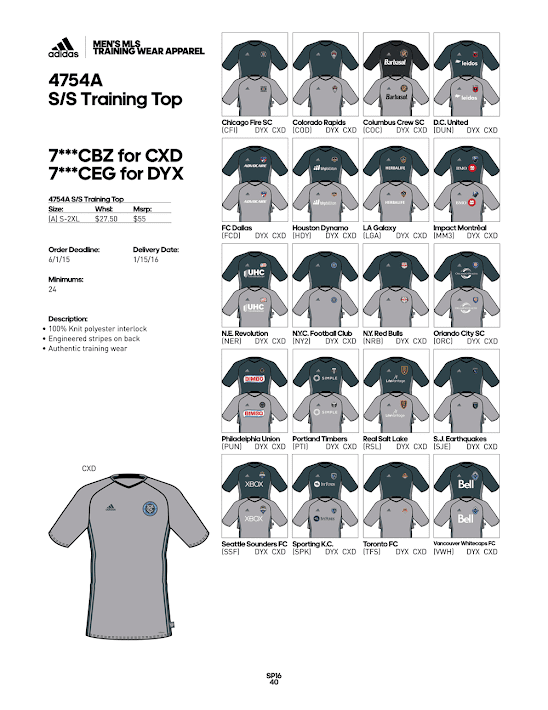 Can't help but notice that Etihad's logo doesn't appear anywhere on these items. Neither does the logo for New York-Presbyterian, the current training sponsor. That may or may not mean anything.

Another thing that stood out; Addidas has moved its signature three stripes from the sleeves, at least on the sideline and training gear. 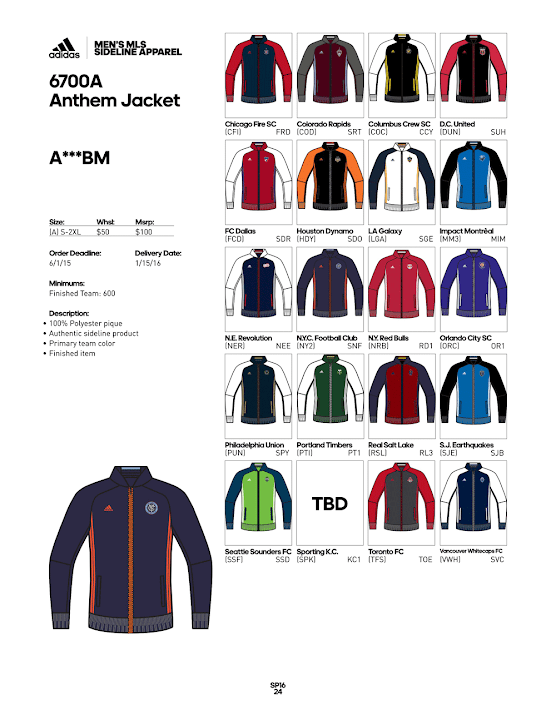 The three stripes now run from the armpit to waistband. 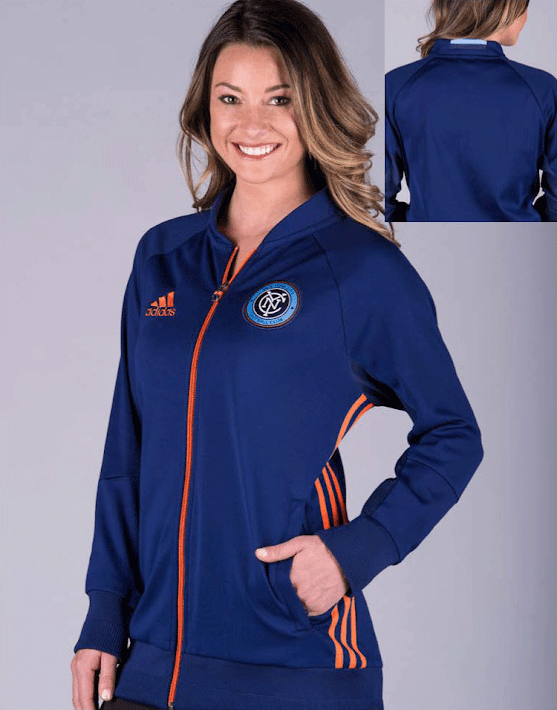 Much less noticeable, which makes me amazed that Adidas would even consider it. Wonder if we'll see the new sleeves on jerseys as well? Perhaps even NYCFC's new navy blue road jersey?
Posted by Chance Michaels at 1:13 PM 2 comments: