The schedule is out! 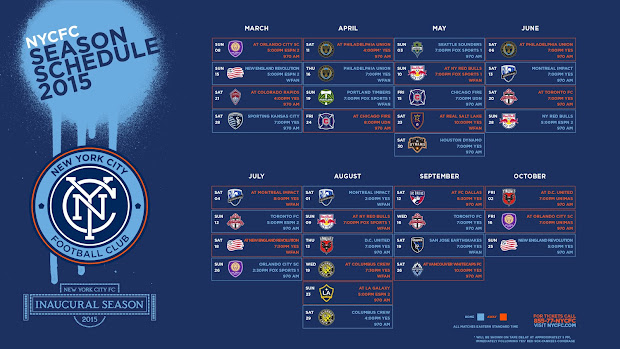 Here's what the club had to say:

The Club will kick-off their inaugural campaign at Orlando on March 8, before hosting MLS Cup Finalist New England the following Sunday March 15 in the historic home opener. Both matches will be nationally televised on ESPN.

The schedule features three matches between New York City FC and the Red Bulls. The first meeting between the two teams will occur on May 10 at Red Bull Arena, followed by the neighbors from New Jersey visiting Yankee Stadium on June 28. The third match will take place on August 9 in New Jersey.

New York City FC will be featured heavily on National TV with 14 of the clubs 34 total games shown on ESPN, Fox, and Univision Deportes. New York City FC’s local television schedule will be released at a later date featuring games on the YES Network. New York City FC games will also be available in English and Spanish in a partnership with CBS Radio and WFAN New York. All National TV times & listings are available on nycfc.com.

Reflecting on today’s announcement, Head Coach Jason Kreis said: “Now we have the schedule for our first season in MLS, the anticipation has built and the excitement increased. We knew our first games already but the having the complete list feels like a landmark on our team calendar and highlights how close we are to the start of the season. Knowing who we will face and when will really help our preparations. We cannot wait to get started.”

The full schedule, including all national TV times & listings are available at nycfc.com/schedule.

Join the Club today, season tickets are available now by calling 855-77-NYCFC or by logging on to the team website at nycfc.com.

Can't wait - I'll be in Orlando for the first-ever game and then in the Bronx to cheer on our Boys in Blue! Hope to see you there!


(edited to include season graphic)
Posted by Chance Michaels at 1:56 PM

Email ThisBlogThis!Share to TwitterShare to FacebookShare to Pinterest
Labels: schedule