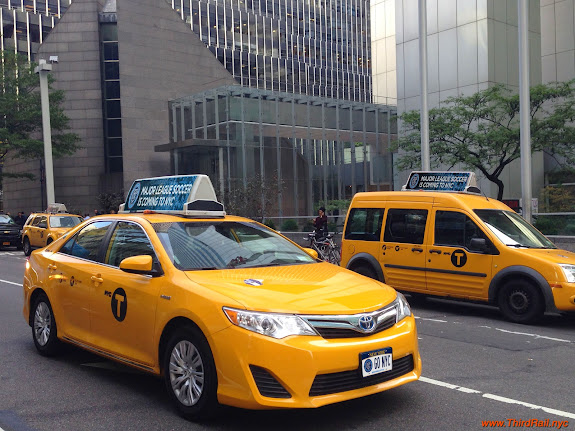 In our efforts to increase the visibility of NYCFC, MLS and the sport of soccer all throughout the metro area, the Third Rail is spearheading a campaign for a custom NYCFC license plate. 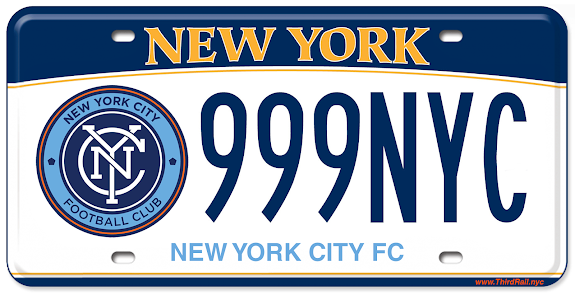 Custom license plates are already available for all the major New York State sports teams, as well as for some more obscure ones.

To design this mockup, I looked at the license plates currently available for professional sports teams. All the plates use the same basic template, with a white background, blue bars across the top and bottom and a team identifier on the left-hand side.

This being New York, there are more options for fans of baseball teams. Even if your team is an independent minor league outfit, or a big-league club that left town sixty years ago. With one notable exception, those designs use the respective teams' primary logos.

The Dodgers' primary logo would probably cause some LA-related confusion, as it hasn't changed in seventy-five years, so the state uses a cap logo instead. Surrounded by a red circle, presumably to set it apart from the blue letters and numbers of the individual plates. Shame, though, that they didn't choose an historically accurate one. And what, no love for the Brooklyn Cyclones?

The gridiron designs are different, using 3D representations of the team helmets:

I think that's a much more dynamic design than flat logos, but not exactly an option we have for our club.

Interesting that the Nets are the only ones to include their league logo.

The state's hockey lovers have solid options; even the minor league Rochester Americans are included. Again, we're back to the primary logos in each case.

With all those pro sports choices, Major League Soccer certainly deserves its due.

It's interesting that most of these designs just have the team logo. Three others—the Brooklyn Nets, Rochester Americans, and Long Island Ducks—also have their name or city along the bottom. For our proposed mockup, I added "NEW YORK CITY FC" in the classic subway-inspired Helvetica font used by the club. Sky blue keeps the name from overwhelming the design. 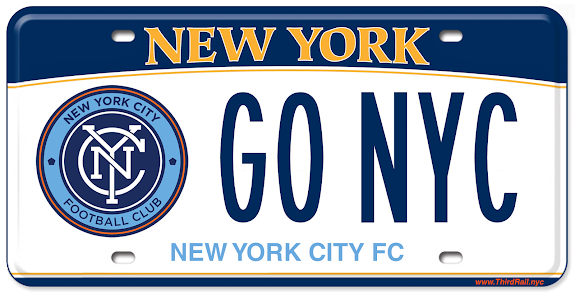 I would expect that if the club is successful, we'd see a design like this.

Adding new organizations to this list requires an act of the Legislature; click here to search for your New York State Assembly representative, and click here to find your Senator. Let them know that you want the option of New York City FC license plates for your car!

Posted by Chance Michaels at 11:01 AM