New York City FC is expected to unveil its kit for 2015 sometime this fall, but concepts are always fun. Here's what I'd like to see when City takes to the pitch next spring: 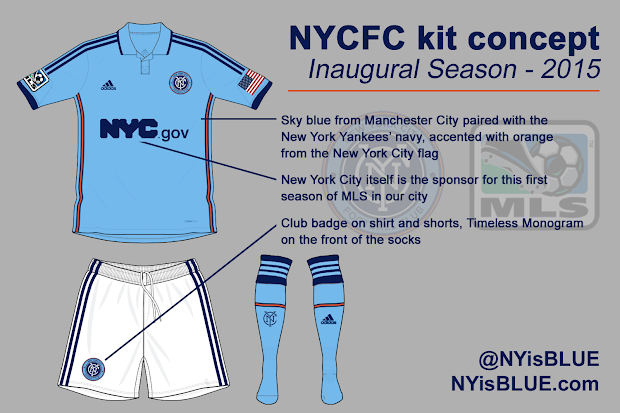 I'm convinced that the club will announce a sponsorship deal with Etihad Airlines (I'm equally convinced that's a mistake), but hey. My concept, my sponsor. I like the idea of promoting the municipality as a gesture of goodwill from our newest team to the city it calls home. Aside from the sponsor, I stuck with a simple, clean template. Well, as clean a template as is possible with those three stripes everywhere.

The stripes down the side of the shirt are intended to echo the navy/orange/navy rings that border the club's crest. I didn't want to use much orange (we'll save that for the change kit), but like just a touch here and on the socks.

I also wanted to find a place to use the "Timeless Monogram" by itself. We have the badge on the shirt, repeated on the shorts, so the socks seemed a perfect place to put it.

Based on the timing, we can presume that the actual kit is already either finalized or close to it. Wonder what approach the club is taking.
Posted by Chance Michaels at 3:18 PM