It's official! Spanish striker David Villa has been introduced as NYCFC's first player. 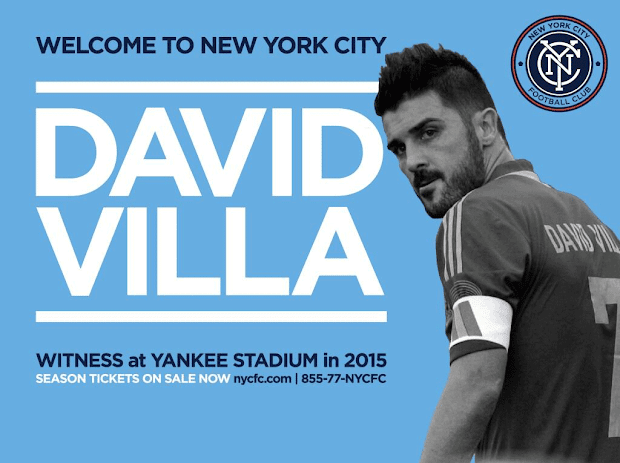 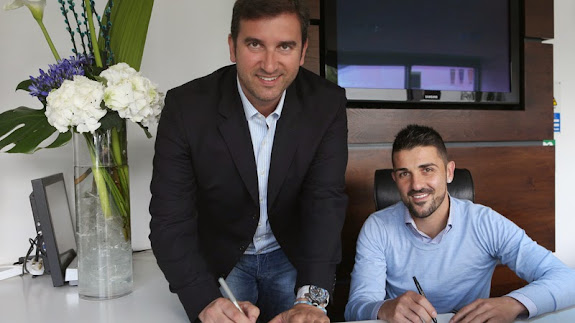 The World Cup winner puts pen to paper
As the club begins to assemble a competitive and dynamic squad, fans in New York will have the opportunity to watch one of the biggest names in world soccer when the Club’s inaugural season begins in 2015.

“This is a historic and exciting moment for the City family and the building of New York City Football Club,” said City CEO Ferran Soriano. “I know David really well; he is one of the best footballers in the world, a true winner and in an outstanding moment of his career. I’m sure New Yorkers will enjoy watching him play for their city.”

“David Villa is undoubtedly one of the most accomplished soccer players and best strikers in the world,” added Jason Kreis, Head Coach, New York City FC. "I couldn't be happier that we have acquired such an amazing talent as our first-ever signing. David will be a shining example of what it will mean to be a New York City player and a leader for us on and off the field. He is hard working, he is a natural competitor, he is a winner at heart, and he is a terrific man. David has checked every box for what we were looking for in our first signing and it is a great day to be a member of this growing family of a club." 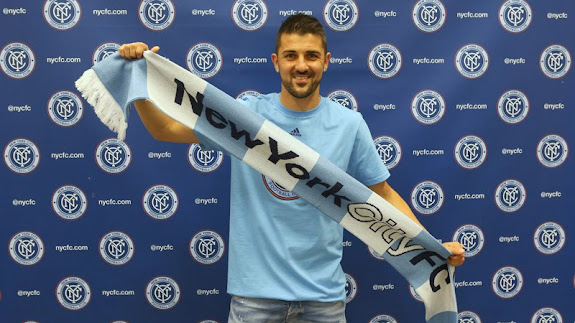 Claudio Reyna, New York City FC Sporting Director commented, “David is the perfect first signing for New York City FC. His individual accomplishments are remarkable. He is the Spanish National Team's all-time top goal scorer as well as the first Spanish player to ever reach 50 international goals. He has won three La Liga championships, the Champions League, and will be playing in his 3rd World Cup this summer in Brazil. His experiences, including winning the 2010 World Cup, will be invaluable for building our club's sporting culture. I couldn’t be more excited to welcome him to New York City and have him as our club’s first player.”

After almost a decade, Villa remains one of the world’s best strikers and is a hero in Spain for his performances in the domestic league and from his international success playing for the national team.

Villa will wear the No.7 shirt as he has done throughout the majority of his career including his time in the formidable Barcelona side between 2010 and 2013. 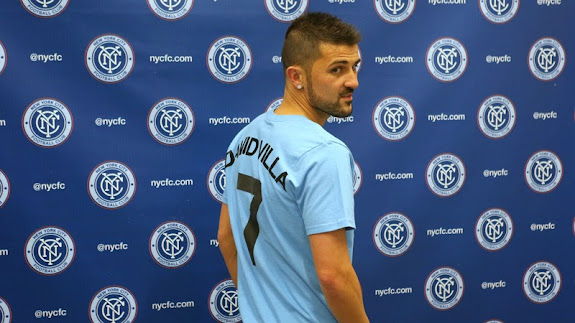 “Throughout my career I've always tried to keep pushing myself to achieve new targets and this represents another important goal for me”, said David Villa. “I want to try and help MLS continue to grow, through playing, working hard, scoring goals and at the same time try to make New York City FC become the best team in the league. It's a real honor that the people who have formed the club have focused their attention on me. I'm keen to do the best I can, take on board that extra responsibility and prove my worth by repaying the confidence they have shown in me.”

On the prospect of playing at Yankee Stadium, David Villa commented, “I’ve been fortunate enough to have played there before with the national team, but now I'm playing there as part of the home team; I hope a lot of people turn out to watch us. It would be nice to create expectation for the fans before the season starts by playing well and getting good results so that New Yorkers can watch their soccer there, identify with their team and become New York City fans.”

The club also released this infographic on his career so far:

Look at that resume - this is an amazing get for City. Villa is on top of the football world right now, and now NYCFC is right up there with him. The farther Spain goes in the World Cup, the more exposure our club gets. And can you imagine the World Cup Final party NYCFC will host if Villa is playing in the match?

And sure enough, you can order a "David Villa New York City FC supporters shirt" at the club shop: 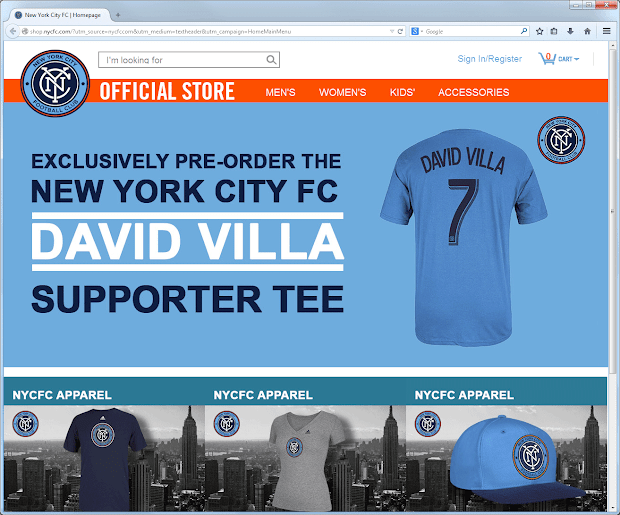 In the absence of an official kit, this is a good choice. 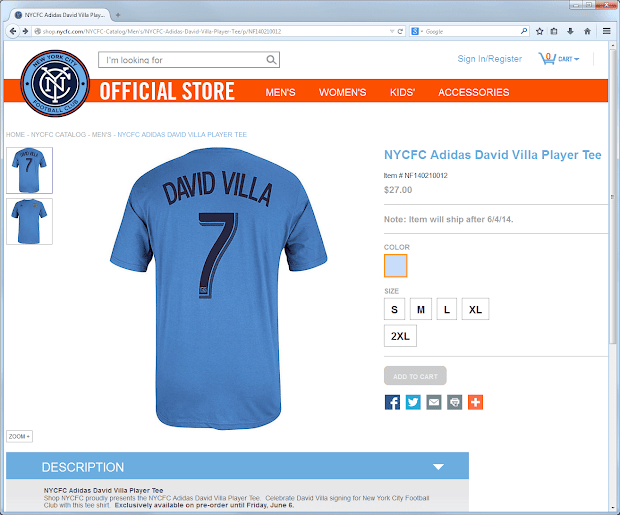 Not, incidentally, the shirt David Villa was wearing (and holding) in his signing photoshoot. That was a straight off-the-rack t-shirt with his name and number applied in a generic font. 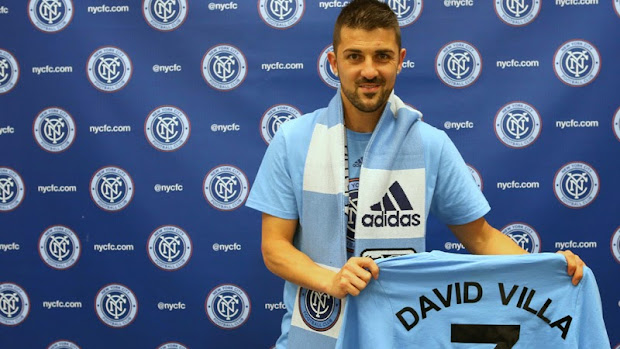 Still, I don't think we can read anything into the design. Unfortunately. I'm a major believer in simple and classic sports design, so a plain sky blue shirt with NYCFC crest (and no sponsor) would be pretty much ideal. Bold strokes. 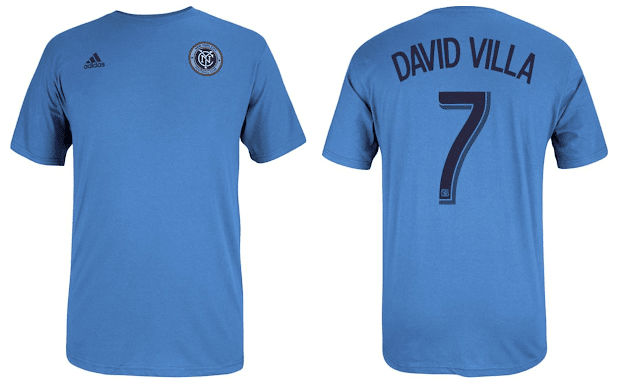 Pair that with white shorts and blue socks, maybe a dark blue collar to set it off, and you've got a winning look.

But I'm getting ahead of myself. One thing at a time, and it's impossible not to be smiling from ear to ear right now, as our club gets its first player. And now that we have our first player, we need to figure out what we're going to call them. I've been pushing "Pigeons" as a club nickname since our first meeting, but it doesn't really seem to have taken off. Others have suggested "Night Owls" or "Insomniacs" after the city's famous nickname, but those too have failed to catch imaginations. Have to keep working on alternatives.

It's a great day to be an NYCFC fan. A major leap forward in the building of our club!
Posted by Chance Michaels at 12:22 PM