David Villa to be Introduced This Weekend? 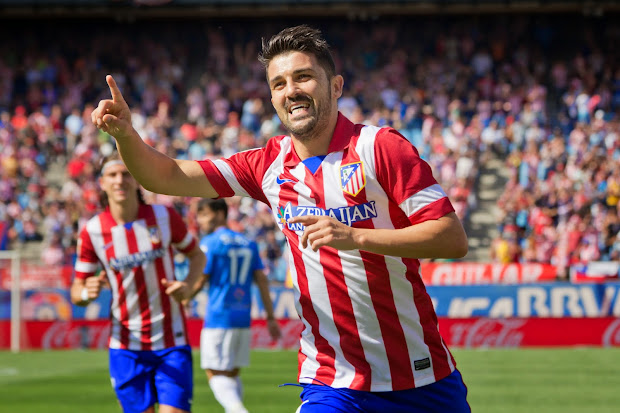 Wikipedia
Inside Spanish Football is reporting that striker David Villa might be announced as NYCFC's first signing as early as this weekend.

New York City FC set to officially confirm the signing of David Villa next week
by Tom Conn | Posted on Friday, May 30th, 2014

The news of Villa’s arrival to New York was broken by Spanish radio station, Cadena COPE’s ‘El Partido de las 12′ on Wednesday, Villa’s current contract with the La Liga champions will expire on 30th June and while the Spanish international has an option to renew for another year, he will forgo that option and make a move to the United States.

Villa joined Atletico Madrid from Barcelona last summer, but was originally brought to Barcelona from Valencia by current Manchester City directors Txiki Bergiristain and Ferran Soriano, who have convinced Spain’s all-time leading scorer to become the face of their new franchise in their inaugural season, while going on back to Atletico Madrid on loan for the first part of the season to keep his form before the MLS season begins in March 2015.

Sources close to ISF have confirmed that Major League Soccer have begun a massive marketing campaign to welcome David Villa to New York City FC, including mass production of his official shirt.

Our source also states that the two sides have been working on the deal for over a year and that the official announcement will come this coming Sunday or Monday.

Villa will fly in with the Spanish national team to be presented by NYC FC before joining his teammates as they prepare for their 7th June friendly against El Salvador at FedEX Field in Washington DC.

That would comport with the timeline I've heard, but there's one piece in this article that strikes me as curious.

Sources close to ISF have confirmed that Major League Soccer have begun a massive marketing campaign to welcome David Villa to New York City FC, including mass production of his official shirt.

They don't have an official shirt yet. I had presumed that NYCFC would want to separate the two announcements—kit design and first signing—although it would make sense to have shirts ready for sale to take advantage of the huge boost in interest Villa would bring to the club.

This could be a very big weekend, indeed.
Posted by Chance Michaels at 4:32 PM