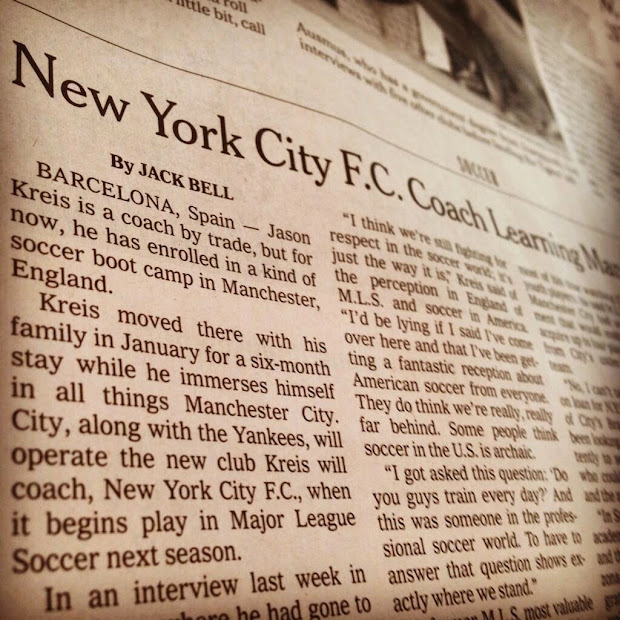 BARCELONA, Spain — Jason Kreis is a coach by trade, but for now, he has enrolled in a kind of soccer boot camp in Manchester, England.

Kreis moved there with his family in January for a six-month stay while he immerses himself in all things Manchester City. City, along with the Yankees, will operate the new club Kreis will coach, New York City F.C., when it begins play in Major League Soccer next season.

The intense, square-jawed Kreis was persuaded by Manchester City last year to leave the relative security of Salt Lake City, where he had coached Real Salt Lake since 2007, for the challenge that awaits him in New York.

In an interview last week in Barcelona, where he had gone to watch Manchester City play in the Champions League, Kreis pointed out that his new job came with immense expectations — not only from City’s deep-pocketed owners and N.Y.C.F.C.’s fans, but also from Kreis’s peers and potential players.

“I think we’re still fighting for respect in the soccer world; it’s just the way it is,” Kreis said of the perception in England of M.L.S. and soccer in America. “I’d be lying if I said I’ve come over here and that I’ve been getting a fantastic reception about American soccer from everyone. They do think we’re really, really far behind. Some people think soccer in the U.S. is archaic.

“I got asked this question: ‘Do you guys train every day?’ And this was someone in the professional soccer world. To have to answer that question shows exactly where we stand.”

In Manchester, Kreis has spent most of his time watching City’s youth players. He said M.L.S. and Manchester City had an agreement that would enable him to acquire up to four players on loan from City’s under-21 academy team.

“No, I can’t take Fernandinho on loan for N.Y.C.,” he said of one of City’s Brazilian stars. “I’ve been looking at the U21 squad intently to see if there are a few who could be useful for N.Y.C., and the answer is, there are.

“In Salt Lake, we only had two academy teams, U16 and U18, and they were both down in Arizona. In Manchester, it’s all integrated down to the U9s. You can walk out and watch the U11 team play on Saturday, and it looks and plays exactly the same as the senior team. And that, to me, was the most amazing thing I’ve seen. The performance of 11-year-old kids in this club, it was off the charts.”

The decision for each Manchester City team in the club to play with the same style “comes from top down,” Kreis said. The philosophy provides continuity as players develop, he added, but also a consistent mind-set that Kreis says is missing in the United States.

“I have an opinion about why we haven’t created good attacking players or creative players that are among the best in the world,” Kreis said of soccer in America. “For me, it’s because we’re very reactive. When I watched the national team play in the past, I’ve always felt the team was playing very reactive to the opponent. We never seem to dictate the game. If you’re always reacting, it’s impossible to create young, attack-minded players because we’re always chasing the ball.”

With less than a year until N.Y.C.F.C. begins play, Kreis described himself as impatient. He called himself “a worrier” intent on waiting for this summer’s international transfer period to make some core acquisitions that he then can augment through the M.L.S. expansion draft and the next college draft.

Perhaps not surprisingly for someone now employed by one of the world’s richest clubs, Kreis was particularly adamant about the need for M.L.S. to loosen the purse strings and increase salary budgets. He complained that the current restrictions leave clubs with little depth.

“I believe the cap has got to be raised, not to allow to spend on big players, but in the middle, the players who really make a difference between winning and losing,“ he said. “The biggest improvement our teams need to make is in the depth of our rosters. We need more cap money to compete in the world market for players.”

Last week’s trip to Barcelona was Kreis’s first outside England since taking his new post. It was not, he said, a vacation.

“We won’t get around Europe until June,” Kreis said. “And I’ve only been to one E.P.L. game, other than City, and that was Liverpool-Everton. Tim Howard got me tickets, which was great. Other than that, I’ve been to a few lower league games looking at players.”

It's great to see some attention from the Gray Lady, and Jack Bell's coverage is second to none.

We're getting a peek at how Kreis might be developing his roster. I love the fact that he's scouting lower leagues outside of City's academy. And he's right about the bench depth; you have to figure that the increased expansion fees, and the deeper pockets paying them, will mean raising the salary cap to increase the value of those clubs.
Posted by Chance Michaels at 7:15 AM