"(T)here's always the danger that (a town hall meeting) degenerates into a shouting match or gives local cranks an opportunity to nurse old grudges."

Last night, the community town hall meeting turned contentious, in part because of those old grudges. I don't know if I was picturing the self-described "communist" who delivered "an expletive laden rant on capitalism" and had to be removed when he tried rushed the stage when I spoke of "local cranks", but he would sure seem to qualify. 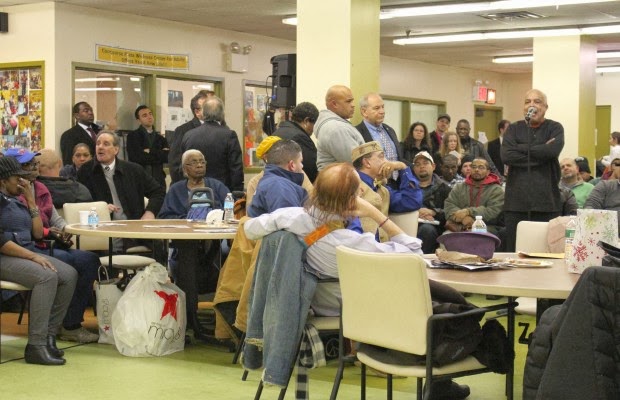 Image credit: Dave Martinez, Empire of Soccer
Not that there aren't good points questioning the stadium. One I found particularly interesting can be found in Empire of Soccer's coverage of the event:

As one Bronx resident put it, "If they want to build it, fine. Use your own money."

Can't say I really disagree with that. The team has sufficient capital that public funds, even tax incentives and city tax-exempt bonds, aren't needed to build the project. I'd be happier if more high-end properties were developed without public dollars, and this could be an excellent opportunity for the team to take a bold stand. They could generate a tremendous amount of local good will, not to mention national press.

Building a soccer-specific stadium without any public money (except possibly for any minor changes that would need to be made to the Major Deegan off-ramp and/or the Metro-North train station) would go a long way towards establishing soccer as the people's game in the Bronx.
Posted by Chance Michaels at 9:51 AM