This has been heating up Twitter feeds and Facebook pages this morning - MCFC has launched a major promotional push for our new club.

Very clever. Minor quibble - no Queens, and "Harlem" gets a shout-out while Chelsea is stuck with "Manhattan" - but it's a great start.

To support this effort, the club has also launched a new contest: each week a winner will be randomly selected to receive two tickets to the first NYCFC home game. Of those weekly winners, one will also receive the Grand Prize: round-trip air flights and hotel for two, and the signed ball from the video.

The video doesn't tip City's hand to its branding plans; the players are wearing Man City gear and the only marks are in Man City's standard font: 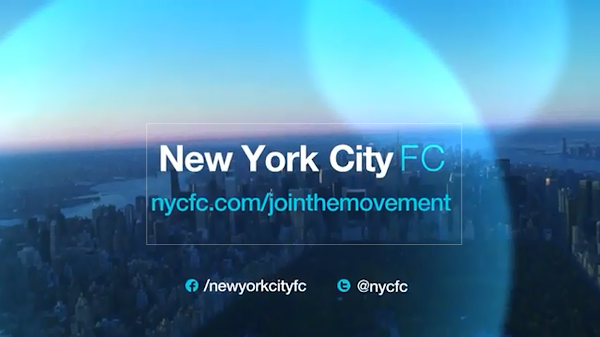 We'll just have to wait to see what they have planned. But it's great to see City starting to stake its claim.
Posted by Chance Michaels at 9:13 AM No comments: 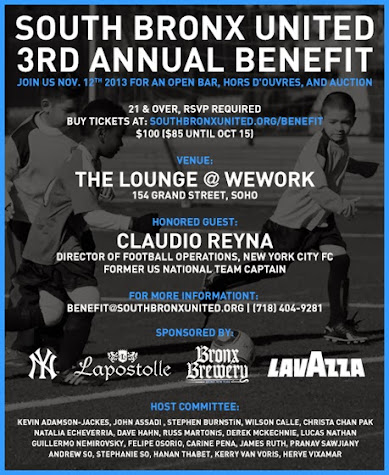 South Bronx United is a youth soccer organization that uses the sport to "help youth build character, teamwork, and leadership so that they can succeed in high school, college, careers, their community and beyond". A very worthy group.

The honored guest at the benefit was none other than our Director of Football, Claudio Reyna:

The SBU coaches and staff with Claudio Reyna. Thanks for a great night! #SBUAnnualBenefit pic.twitter.com/bUTimhnMof

Good to see the club laying down roots in the community.

Congratulations to our guy Claudio Reyna on being honored by @SBronxUnited at last night's #SBUAnnualBenefit. #NYCFC pic.twitter.com/n9XDidqZjO

Congrats, indeed!
Posted by Chance Michaels at 12:23 PM No comments: 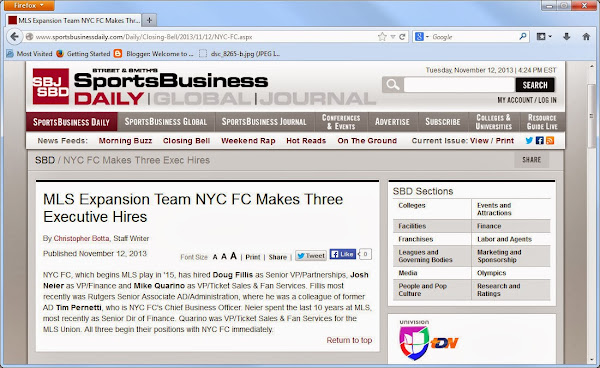 NYC FC, which begins MLS play in '15, has hired Doug Fillis as Senior VP/Partnerships, Josh Neier as VP/Finance and Mike Quarino as VP/Ticket Sales & Fan Services. Fillis most recently was Rutgers Senior Associate AD/Administration, where he was a colleague of former AD Tim Pernetti, who is NYC FC's Chief Business Officer. Neier spent the last 10 years at MLS, most recently as Senior Dir of Finance. Quarino was VP/Ticket Sales & Fan Services for the MLS Union. All three begin their positions with NYC FC immediately.

Very interesting. We knew about Mike Quarino, but I don't believe the other two had previously been announced.

The organization is coming together. And they bring some good experience within the sport.

UPDATED 11:14 PM:   The announcement is now up on the club's website, with more information on the three new hires:

Speaking of the new hires, Tim Pernetti, Chief Business Officer of New York City Football Club said, "Launching a Major League Soccer expansion team, especially in a market like New York City, requires progressive and experienced leadership in the front office. In Doug, Josh and Mike we have a team with proven leadership and real expertise in their fields in roles which we have identified as central to our growth. These additions to our team are an exciting step on the path to building a premier Major League Soccer Club."

For the past eight years, Fillis has worked in college athletics, most recently at Rutgers University as Senior Associated Athletic Director for Administration. In this role he was responsible for sealing a $65 million partnership with IMG College, overseeing the school’s $100 million fundraising campaign, and securing and leading major sponsor partnerships. Prior to this, Fillis oversaw all revenue businesses, development, and fundraising at the U.S. Military Academy, managing the naming rights agreement with Siemens and, the business plan, including sponsorship and revenue creation, for the Army at Yankee Stadium Series.

Both Neier and Quarino come to NYCFC from previous jobs within Major League Soccer. Neier previously spent 10 years in the finance department of Major League Soccer and was most recently Senior Director, Finance, for the League. Quarino most recently spent five years with Philadelphia Union as Vice President of Ticket Sales & Fan Services, overseeing all ticket programs and revenue as well as serving as an integral part of the senior management team that launched the Union as an expansion team in 2010.

Quarino also spent six years as a Senior Manager of Ticket Programs with the New York Red Bulls, responsible for the Group Sales Department where he was named in the MLS Ticket Sales Best XI in both Total Revenue and Group Ticket Sales in 2007 and 2008.

Announced in May 2013, New York City Football Club will be the league's 20th team, beginning play in the 2015 season. The team was launched in partnership by Manchester City Football Club and the New York Yankees and is led by Chief Executive Officer Ferran Soriano.

Posted by Chance Michaels at 4:38 PM No comments:

Today, as New Yorkers head to the polls to elect our next Mayor, comes word of a new hire for NYCFC. 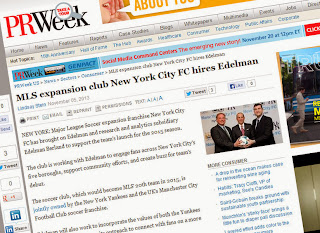 The soccer club, which would become MLS' 20th team in 2015, is jointly owned by the New York Yankees and the UK's Manchester City Football Club soccer franchise.

Edelman will also work to incorporate the values of both the Yankees and Manchester City into its outreach to connect with fans on a more intimate level.

“New York City has built so many great sports teams, and both the New York Yankees and Manchester City have a tremendous history of accomplishments,” said agency president and CEO Richard Edelman, in a statement.

The team is still without a home. In August, the club reportedly filed plans to build a soccer stadium in the Bronx near Yankee Stadium. Residents and elected officials had previously objected to the club constructing a stadium in Flushing Meadows-Corona Park in Queens.

Edelman Berland is working with New York City Football Club on research initiatives to help the franchise understand the soccer market in New York and build its fan base.

Retired English soccer superstar David Beckham will work to establish a team in Miami in coming years that would become the league's 21st club, according to the Associated Press.

I know it's frustrating from the outside, not to know what's going on with the club, but it's good to see that they're continuing to ramp up its operations.
Posted by Chance Michaels at 5:09 PM No comments:

A new day begins. Looking forward to getting started with @nycfc and building something special. #MLSinNYC pic.twitter.com/7js1kfqJPM

Mike Quarino is NYCFC's new VP of Ticket Sales & Fan Services. He comes to us from the Philadelphia Union, where he held the same position.

Welcome to New York, Mike!
Posted by Chance Michaels at 8:23 PM No comments:

A very pleasant surprise for this Friday:

Can't wait. I'll post a picture as soon as it arrives.
Posted by Chance Michaels at 6:27 PM No comments: