There's not much to talk about regarding our newest club, but the announcement that NYC will finally be represented in MLS has drawn lots of attention from the design community. We have another concept crest, this one from Cláudio Cruz. 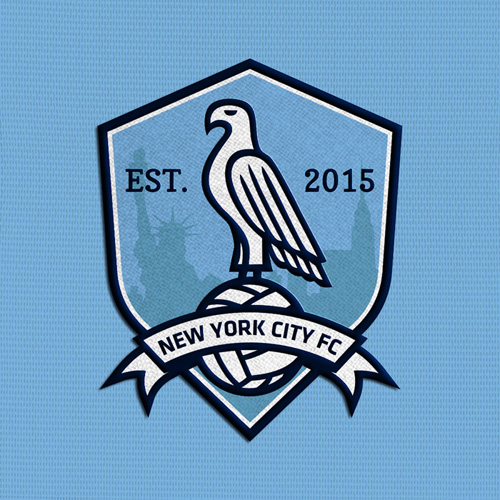 I apologize for the rough translation:

Today I bring you my idea for the New York City FC, ​​a new team that will act in MLS from 2015, and born from the partnership between Manchester City and the New York Yankees.

Regarding the emblem, used a format shield with an eagle on the inside, the idea of ​​using the eagle was due to the fact that the common element between Manchester City emblem and flag of the city of New York. 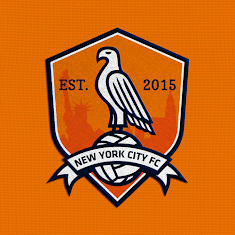 This eagle appears white, resting on a soccer ball, which means precisely the sport where this emblem is used. Appear at the bottom of the emblem silhouettes of some buildings in the city of New York, including the Empire State Building (right), as well as the Statue of Liberty (left). Appears also a reference to the year of creation of the club, with the inscription EST. In 2015. Finally, the name "New York City FC" appears in white band, thus completing the emblem.

The emblem on the left, used as base colors, sky blue of Manchester City and the dark blue of the New York Yankees. The emblem of the Right, I used only the colors of the flag of the city of New York, which are dark blue, white and orange.

Very nice. The sublimated buildings are a good way of bringing the city's landmarks without letting them overwhelm the design.

I love the simple Deco bird - that would fit right in on the Chrysler Building. The bird-on-ball would also make a good secondary, if a bit Spurs-ish. Then again, a pigeon would be cool - "Pigeons" would be a good nickname for the team.

What do you think? Would this be a fitting crest for the club?
Posted by Chance Michaels at 4:25 PM 1 comment:

We have another unofficial design concept for the club, this time from California-based designer Mike Retrum.

He blends the crest of Man City with Yankees iconography to create a design with clear lineage that stands very much on its own.

I like the badge, although when it was designed Queens was the presumed home of the club. That's no longer true, leaving the crown as something of a potential geographical anachronism. 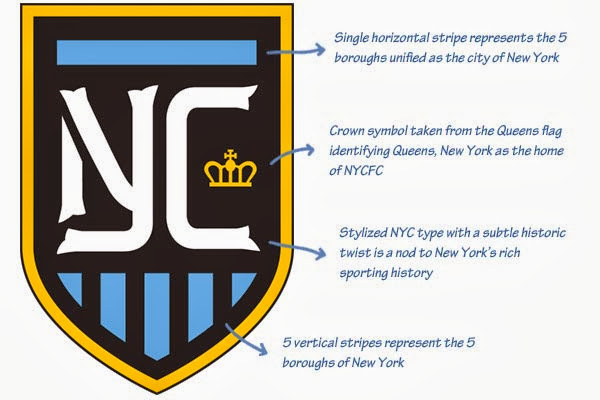 The type is very good, though, combining the "N" and "Y" in a way I haven't seen before. 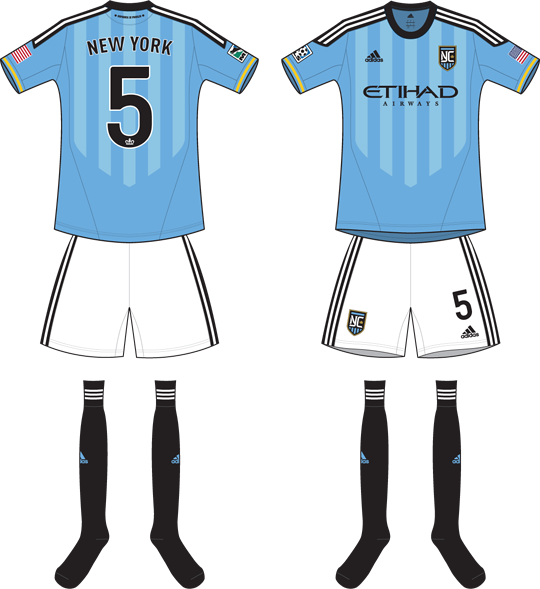 There's much more at his site - check out the full concept and let me know what you think.
Posted by Chance Michaels at 5:04 PM No comments:

Queens Has Some Competition

The Bronx has just jumped into the stadium game, with this letter from Bronx Borough President Ruben Diaz Jr. to Commissioner Garber: 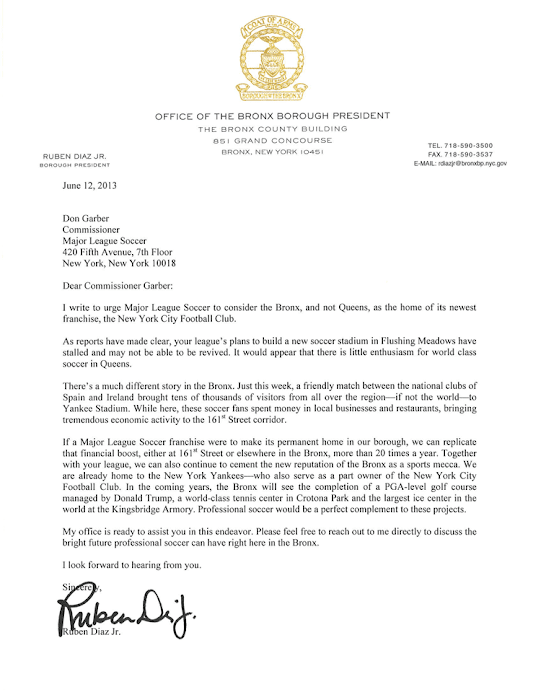 The text of the letter reads:

I write to urge Major League Soccer to consider the Bronx, and not Queens, as the home of its newest franchise, the New York City Football Club.

As reports have made clear, your league's plans to build a new soccer stadium in Flushing Meadows have stalled and may not be able to be revived. It would appear that there is little enthusiasm for world class soccer in Queens.

There's a much different story in the Bronx. Just this week, a friendly match between the national clubs of Spain and Ireland brought tens of thousands of visitors from all over the region—if not the world—to Yankee Stadium. While here, these soccer fans spent money in local businesses and restaurants, bringing tremendous economic activity to the 161th Street corridor.

If a Major League Soccer franchise were to make its permanent home in our borough, we can replicate that financial boost, either at 161th Street or elsewhere in the Bronx, more than 20 times a year. Together with your league, we can also continue to cement the new reputation of the Bronx as a sports mecca. We are already home to the New York Yankees—who also serve as a part owner of the New York City Football Club. In the coming years, the Bronx will see the completion of a PGA-level golf course managed by Donald Trump, a world-class tennis center in Crotona Park and the largest ice center in the world at the Kingsbridge Armory. Professional soccer would be a perfect complement to these projects.

My office is ready to assist you in this endeavor. Please feel free to reach out to me directly to discuss the bright future professional soccer can have right here in the Bronx.

I look forward to hearing from you.

Well. The gauntlet has been thrown down.

I wonder where in the Bronx they could build it? I like the idea of building a sports district near Yankee Stadium, but don't know where they could find the land in such a developed area. There's enough lingering animosity over the Yankee Stadium parkland giveaway to make a repeat politically impossible.
Posted by Chance Michaels at 1:34 PM No comments: